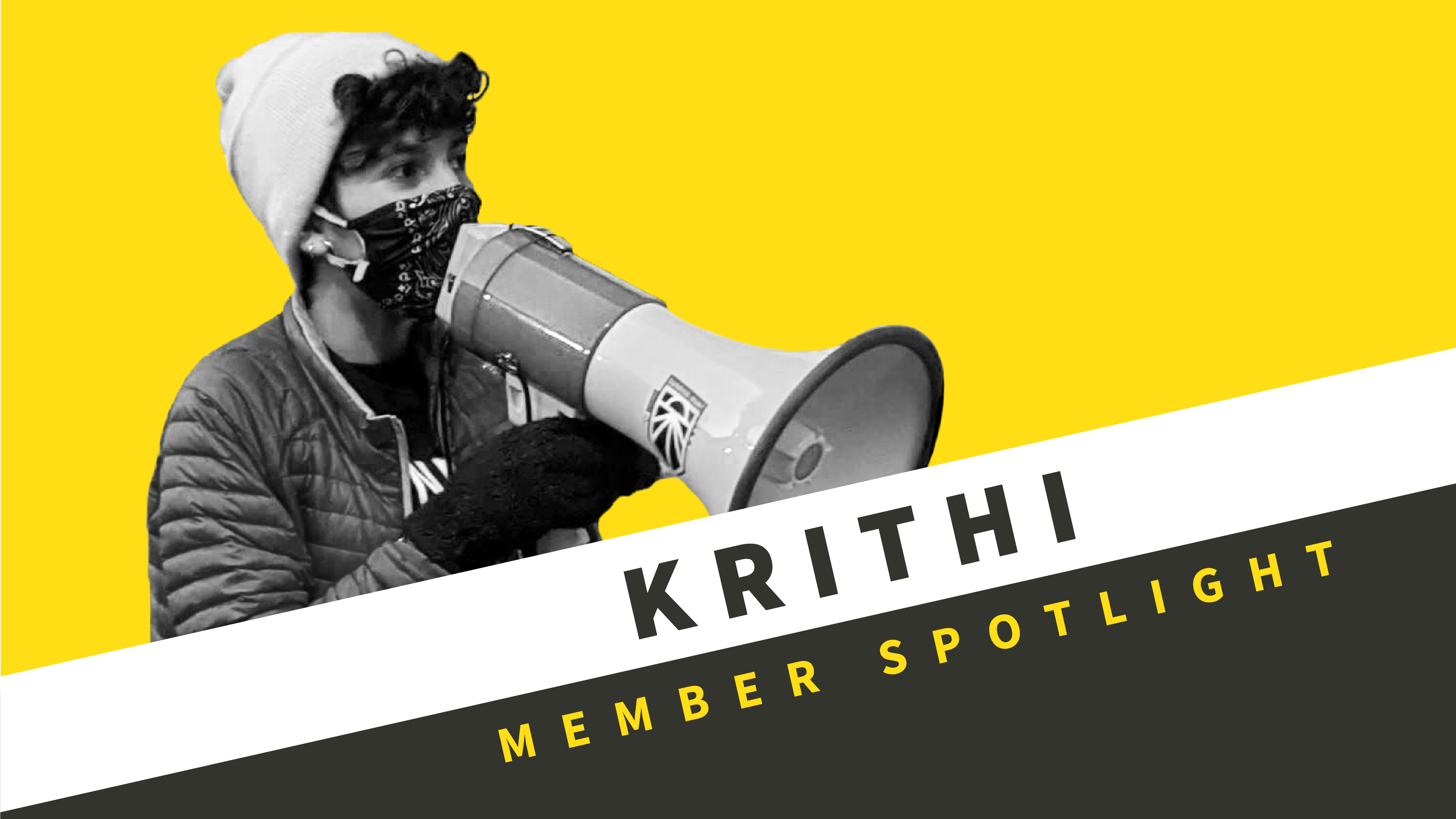 Sunrise is meant to be a youth movement. Krithi is someone who makes sure that Sunrise DC keeps that promise. She is a fierce voice for justice in this movement, an incredible artist, and a deeply thoughtful revolutionary. I got the chance to talk with her about her work with Sunrise, her experience as an activist, and what she has to say to some folks in power.

First, can you tell me a little about your involvement in Sunrise DC and what you’ve been up to?‍

I initially joined Sunrise through a high school hub, and that’s how I got involved in DC. At this point I was kind of getting more interested in art, and I found an amazing opportunity to work with the Creative Tactics team to come up with banners and stencil designs for any actions. And then, as I started to get more involved and understand more about DC and what Sunrise does here, I wanted to build a youth base in the hub because there weren’t really any high schoolers, and if there were, they usually didn’t feel comfortable enough reaching out to people. So I worked to establish a youth base. It’s still a work in progress, because we’re rethinking some stuff right now.

What made you want to get into activism in the first place?‍

When I was a lot younger I remember that I was on a school field trip, and this was in India. Basically, they took us to a landfill. And my reaction at that time was confusion. I was like, “Why are they taking us to a landfill?” But I learned more about it, and from then on this idea of sustainability — not just “Is the earth going to fill up with trash?” but “Is the way that we’re living right now sustainable for our future in every way?” So that concept has just been in my head for a while. And I never found an outlet where I could express that in a way that I felt comfortable with. So Sunrise being a non-academic space was really amazing, and I was able to still do what I was interested in. That’s how it started, with art, which is where I feel like I can contribute the most with my skill set.

Have you always been an artistic person?‍

Yeah, I would say so, but I never really got super involved in it. Now I’m at this point where I’m learning so much from Sunrise in terms of art and the intersectionality of so many different causes. Plus, I think one important thing to remember is that no one in this movement is replaceable. We all have to find a place to exist in and not tell other people that they don’t belong there.

I love that: ”No one is replaceable.” I think that’s so important in activism. So, you are a high schooler yourself, you’ve done a lot of work with other high schoolers. What do you think stands in the way of young people like you getting into activism? What are the barriers that we need to work on eradicating?‍

The first thing is that the work can seem irrelevant. And even when it does seem relevant, it just doesn’t engage anyone in any way. It’s putting it into an academic context where it just turns it into a project, and activism and organizing is not a project. It’s a lot more than that. It’s something that you’re supposed to care about. So, I think that when you take that ability for someone to care about the cause, when you take that out of it, it just leaves it as a task or something that has to get done. And I think that that can deter a lot of people from organizing. I think it’s also hard to get involved in a space with people who are a lot older, and they might not want to hear your perspective or may not be comfortable giving you autonomy.

Given the fact that you’re talking about how it’s hard to organize with older people, and older people aren’t always respectful: If you could give a message to the establishment of activism, what would you say to them?‍

It just goes beyond being young, it’s more about the underdog rather than being young. At any given point there’s always an underdog, and right now it happens to be young people. In some other case it could be some other marginalized community, so it could be anyone. So the whole idea is, if this is a revolution, then we have to listen to whoever’s bringing up the problems and the issues and the causes. And also, especially in this movement, to not treat young people as figureheads who make the cause look nice. Because we have actual ideas that need to be listened to.

So the other version of that question is, if you had the ear of establishment politicians--if you could say something to Nancy Pelosi or even Joe Biden, what would you want them to know?‍

I haven’t really thought about that mostly because I’m just frustrated at how politicians make these promises and then they kind of, behind closed doors, do other things and aren’t completely transparent. So I guess I would say that just because politicians are being really shady about things, doesn’t mean that the rest of the world doesn’t know what’s happening. And you can’t really hide behind closed doors.

My last question is: what’s something that gives you hope?‍

Honestly, the people in this movement, specifically Sunrise DC. And that’s probably the reason I’ve actually stayed. Because there are a lot of movements like this, but I stay because of the people. To see everyone so committed to the cause. And also people pointing out mistakes in the system. Even within Sunrise, we have to have those conversations, of “This is not functioning” or “This is not a respectful way to say this.” I think at the end of the day, calling those differences out makes us a better movement and helps us grow.